This selection of ‘Poems from the Sanskrit’ was a favorite among a group of friends, well, a while ago. On hot summer afternoons, after lectures, we would sit in one of the 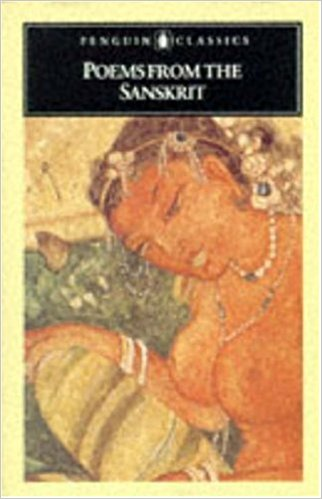 cool stone alcoves that ran on one side of the college courtyard, boys and girls, and read aloud these poems, with many a smile and warm glance exchanged, sighs, and frequent ‘Wows!’.

"When the pet parrot in the morning starts
To chatter rather much of what he heard
Of last night’s talk between the young sweethearts,
The young wife does her best to check the bird,
Embarrassed that the older folk should hear,
And quickly stops his beak, trying to feed
The creature with a ruby from her ear,
Pretending it’s a pomegranate seed."
Amaru – 7th or 8th century CE
"Fluttering her hands, she tries to find her clothes,
And throws her broken garland at the lamp,
Laughing in shy confusion, while she tries
To cover up my eyes. How sweet she is
To look and look at, after we’ve made love!"
Amaru
"In former days we'd both agree
That you were me, and I was you.
What has now happened to us two,
That you are you, and I am me?"
Bhartrihari – probably 5th century CE
"Hand in clasped hand and side pressed close to side,
Silently stand some children of the poor,
And shyly, hungry eyes half-turned aside,
Observe the eater through the open door."
The Subhasitaratnakosa compiled by Vidyakara perhaps in the 1090s CE